Transference has exceeded the mental milestone of 10M Views on YouTube! If you’ve not seen it, you can watch the full bipolar love story movie for free below!

Thanks to everybody who has viewed, liked and shared Transference on YouTube, where it has just topped a whopping 8.5M Views!!! 8 is considered the luckiest number of all in Chinese culture, associated with wealth. As a gesture of goodwill and to pay the way for future film collaborations, I am marking this moment by writing director Raffaello Degruttola a cheque, immediately, for the sum of HK$8 (US$1.02), doubling his net worth! 😆

If you haven’t already seen it, you can view the feature-length film I was lucky enough to co-produce below!

Transference has received over 5.2M views on YouTube! The bipolar love story by Raffaello Degruttola explores the corrosive impact unresolved mental health issues have on an obsessive relationship. The film was made with a lot of heart and features haunting performances by its two leads. I was lucky enough to co-produce it. If you’ve not checked it out, you can watch the whole thing for free here! #mentalhealthmatters #controventofilms #1091pictures #mentalideas

The indie film I co-produced has just soared to over 4.3 million views on YouTube! Thanks to everybody who’s watched and supported the film’s mental health mission!

Transference keeps on keeping on surpassing mental milestones: the indie feature film I helped co-produce (through Mental Ideas) is fast approaching 3.7M views on YouTube! Thanks to everyone who has watched and supported it! Had we charged a cent a view, we’d have actually broken even! But of course the film’s purpose was to raise awareness of important mental health issues, not to make money (as I continue to console Raff…🤣 🤣 🤣)

Can’t WAIT to see Raff‘s latest ingenious film Little Boxes, shot entirely on Zoom in lockdown! It’s racking up an impressive array of awards nominations, despite still being in post-production! Congrats Raff, producers Lee Boardman (my old flatmate in London billions of light years ago!), his gorgeous wife Jennifer James and the talented group of actors they train and mentor at their Manchester-based acting school/ company Actor Tribe who star in the film!

I’m hoping to catch up with Raff and Lee for a chat (on Zoom – ironically…) about the film on S2 of Mental Ideas on RTHK Radio 3! You can watch Lee playing Arron Banks in Brexit: An Uncivil War on HBO in Hong Kong now!

Transference has surpassed 2.2M views on YouTube! No words (for once). 😂

Transference has already received over 1.7M views on YouTube!!! So proud of my involvement as a co-producer of this feature-length indie film to raise awareness of mental health! Congratulations Raff (director/ male lead) and to everyone who worked on it since its conception in 2019! 🙏 🙏🏽 🙏🏿

Transference, the bipolar love story I co-produced in 2020 with Contro Vento Films, was one of the first films to be shown at the 2021 Arizona International Film Festival, which kicked off April 14! Director and actor Raffaello Degruttola gave an illuminating webinar on his inspirations behind the film on Zoom @ 3pm PST on Saturday. If you missed it, please don’t cry! You can still catch it on the festival’s YouTube channel for at least another week!

Thanks to the festival for selecting Transference (originally for its 2020 film festival, which was cancelled because of COVID) and to the Tuscon Weekly for mentioning our micro budget indie film in their article about the festival!

Transference: A Bipolar Love Story received a Special Jury Mention in the Narrative Feature category at the New York Socially Relevant Film Festival! So proud of my involvement as a co-producer of this indie gem, directed by and starring the one and only Raffaello Degruttola. Congrats Raff! You can meet the filmmakers (including Raff) by subscribing to SRFF’s YouTube channel HERE!

Big thanks to @SR-FilmFestNY and the judges for recognizing our film. Congratulations to the cast & crew of Lorik for winning the category! And thanks to all of you who liked and shared my own and Mental Ideas’ posts about the festival on social media!

Next stop: the Arizona International Film Festival, where Transference has been selected in the Dramatic Feature category. The festival kicks off Oct 1st! 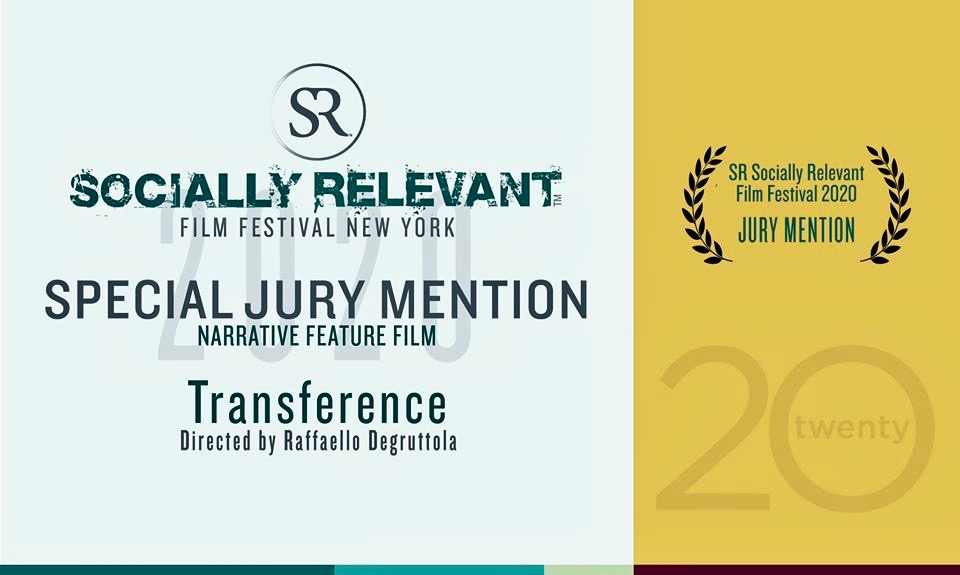 First chance to see a film I co-produced Transference: A Bipolar Love Story online at the New York Socially Relevant Film Festival! The indie film recently picked up awards for Best Dramatic Feature at the Anatolia and Zoroaster film festivals and has been officially selected by the Arizona International Film Festival. It is being distributed by 1091 Media/ The Orchard.

As well as being the film’s world premiere, there’s a live Q&A on Zoom with the film’s director/lead actor Raffaello Degruttola and lead actress Emilie Sofie Johannesen. Both are incredible! Transference: A Bipolar Love Story is one of four films shortlisted in SRFF‘s Narrative Feature category that will stream online for 48 hours from June 26 (5pm NYT) to June 28 (5pm NYT). Click on the link below to reserve your place!